A new nationwide hate crime campaign aimed at increasing awareness and understanding of what constitutes a hate crime has been launched by the government.

The campaign has been developed in consultation with the Crown Prosecution Service (CPS), the Independent Advisory Group on Hate Crime and other organisations, to help the public understand hate crime, particularly offences which often people do not recognise as criminal, such as some forms of online and verbal abuse. 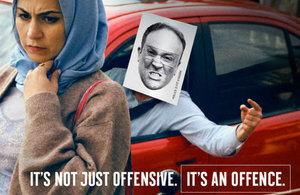 This includes educating perpetrators who have been motivated by hostility towards the victim’s race, religion, sexual orientation, transgender identity or disability that they have committed a hate crime.

The strapline of the campaign sends a clear message about what hate crime is:

‘If you target anyone with verbal, online or physical abuse because of their religion, race, sexual orientation, disability or transgender identity – you may be committing a hate crime. It’s not just offensive. It’s an offence.’

Committing a hate crime goes against all the shared values we hold and can have a traumatic impact on victims.

The campaign gives clear examples of hate crime and sends a message that not only is this behaviour unacceptable, it is a criminal offence.

This is just one part of the ongoing work of the government to tackle hate crime to ensure this sickening behaviour is stamped out.

The campaign goes live today (Wednesday 31 October) with adverts running on video-on-demand sites, social media and posters to be displayed across the country.

Each video or poster features a different offender, represented by an e-fit, and a hate crime taking place.

The campaign seeks to reassure communities at risk of hate crime that the government takes this seriously and to publicly address the attitudes and beliefs that foster hate crime and re-establish boundaries around not targeting people on the basis of their identify.

The campaign website also signposts organisations where victims and witnesses can get the support they need.

Hate crime has a corrosive effect on society and being on the receiving end of an incident can be particularly distressing because of its personal nature.

The CPS works closely with the police to prosecute thousands of cases every year. More than two-thirds of offenders are now receiving tougher, uplifted sentences from the courts – the highest levels ever recorded.

We take hate crime very seriously and are committed to properly supporting victims. People should be in no doubt – if you believe you have been a victim of hate crime you should report it to the police.

Along with the CPS, the Home Office consulted with the Independent Advisory Group on Hate Crime, which includes groups such as Stop Hate UK, Tell MAMA, Community Security Trust (CST), Stonewall and Galop.

We know 2 key facts about hate crimes. The impact on victims is devastating and life changing, and perpetrators often escalate in the seriousness of their offending.

This campaign is important in emphasising the corrosive impact these crimes have on communities.

The launch comes after statistics showed 94,098 hate crimes were recorded by police in England and Wales in the year to March 2018.

The campaign forms part of the government’s wider programme of work to tackle hate crime. Earlier this month the government updated its hate crime action plan, which included: